Born In A Pandemic, 8-Month-Old Carter Is Still Waiting To Meet Some Family Originally published April 2, 2021. Update: Daniel and Spencer welcomed their second child in March 2022. Scroll down to see a photo of the family of four!

When Daniel and Spencer Conklin started their journey to parenthood, it was about a year before anyone had heard of COVID-19. By the time they were expecting their first child, the coronavirus was in full swing, and widespread travel recommendations were in effect.

Like many first-time fathers who are now navigating being a parent amid a pandemic, the Conklins are still waiting to introduce their son Carter to dozens of family and friends.

“The first half of the pregnancy was before the pandemic, so we got to witness a lot of the milestones,” Daniel said. “We were even fortunate enough to be in the delivery room when our surrogate gave birth. COVID has really changed our journey, but I think we made the most of it.” 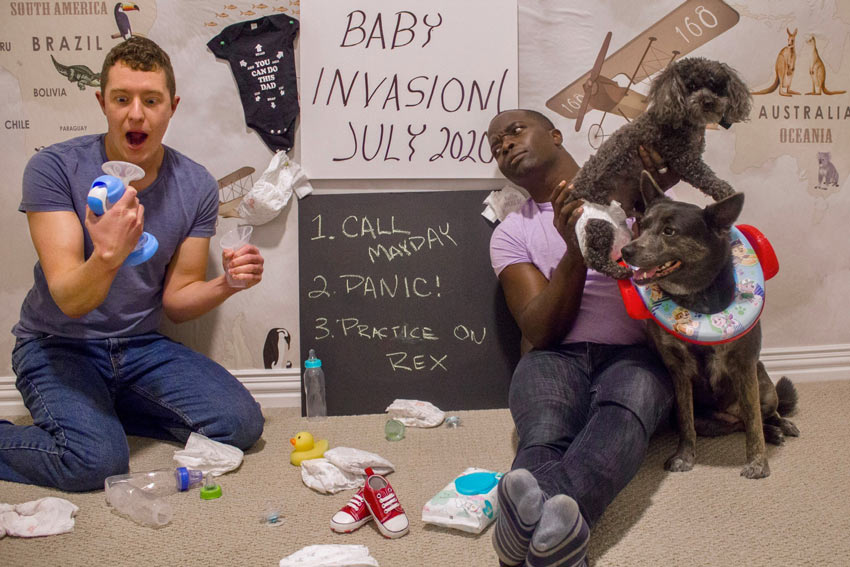 Spencer, an airline pilot, and Daniel, who works in Human Resources, first connected online in 2015 while Spencer was in Dallas for flight training. The two met for a drink, which Daniel called “bittersweet” because Spencer was leaving the following day to return to Chicago. But they remained in constant contact, and it wasn’t long before Spencer followed through on his long-held plans to relocate. Of course, he chose Dallas.

The couple were looking into ways to start their family for several years before they welcomed their son Carter into the world in July 2020. That preparation included attending a Men Having Babies (MHB) conference, and interviewing several couples who had used clinics and agencies.

“My husband and I are both detail-oriented people,” Daniel said. “We want to plan everything. So we went to a MHB conference in 2017 to understand the cost and what would be involved, even though we didn’t plan to have a child for another 2 to 3 years.”

The Conklins were married in September 2018, and they started the early stages of the surrogacy process in January 2019. Within a year, they got the joyful news that they were pregnant. Daniel said people were surprised at how quickly they announced they were expecting. 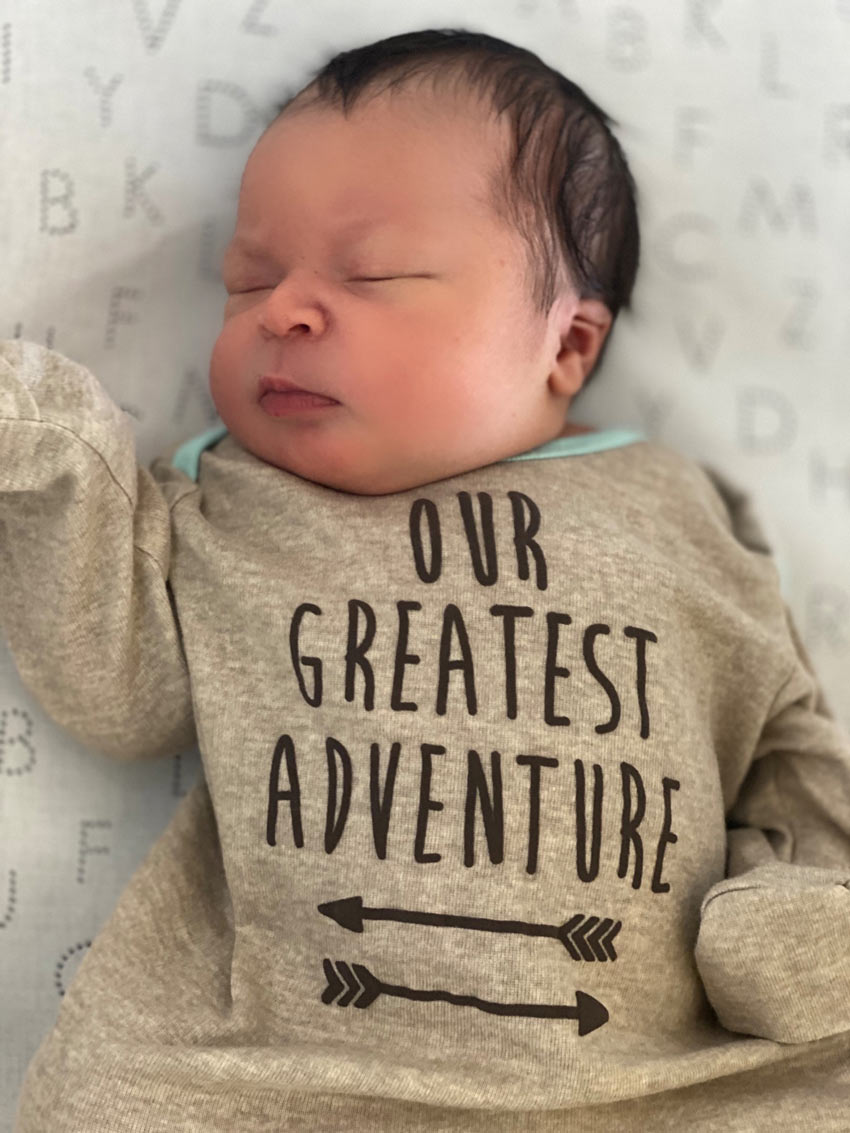 “Things moved pretty fast, and we were able to announce the due date on New Years’ Day 2020,” he said. “That shocked a lot of people because it was so quick compared to many of the other journeys.”

Daniel said there was one simple reason surrogacy was the right path for them; “Because we wanted our child to be related to both of us. My sister donated her egg, and we used my husband’s sperm.”

Their families and loved ones had known for a while that they both wanted to have kids, and Daniel said his family were happy to hear that his sister was going to be the egg donor. When asked about the toughest part of the process, he said the biggest struggle for some of his family was understanding that his sister is not the baby’s mother.

“We simply explained that Carter has two dads,” Daniel said. “He was carried by a surrogate, and my sister donated the egg. Some kids have one parent, and some kids have four if their parents divorce and remarry. Our family dynamic is just one of many throughout the world.” 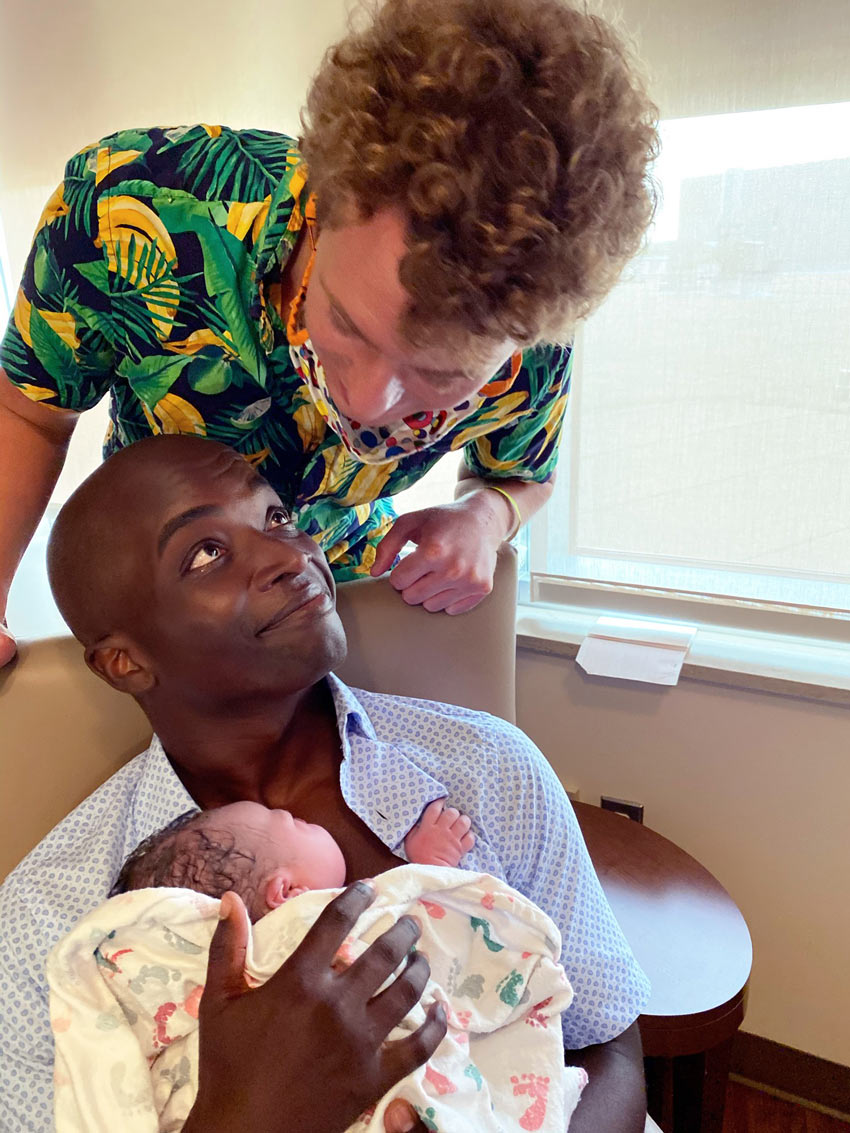 As a couple who love to travel, and since Spencer is a pilot, they would typically hop on flights several times a month and jet off for quick getaways. But when they learned their new baby was on the way, they realized that a large part of their life would soon have to change.

“Once our surrogate was pregnant, I think we both had a reality check that those spur-of-the-moment trips would not always be possible,” Spencer said.

However, their travel habits were impacted much sooner than they expected, and for a very different reason. As Carter’s due date approached, COVID-19 restrictions started tightening in Texas, and the Conklins realized it may be longer than initially expected before their son could be introduced to both sides of their families.

“My family are all here,” Daniel said. “So once Carter was born, the impact on us was that there were no Sunday dinners because of COVID. But for my husband, we’d planned a trip to see my in-laws in Iowa in December 2020. And that didn’t happen. They still haven’t all met our son.”

Although much of Spencer’s family lives in the Midwest, his mother also lives in Dallas, so she has been able to meet her eight-month-old grandson Carter. 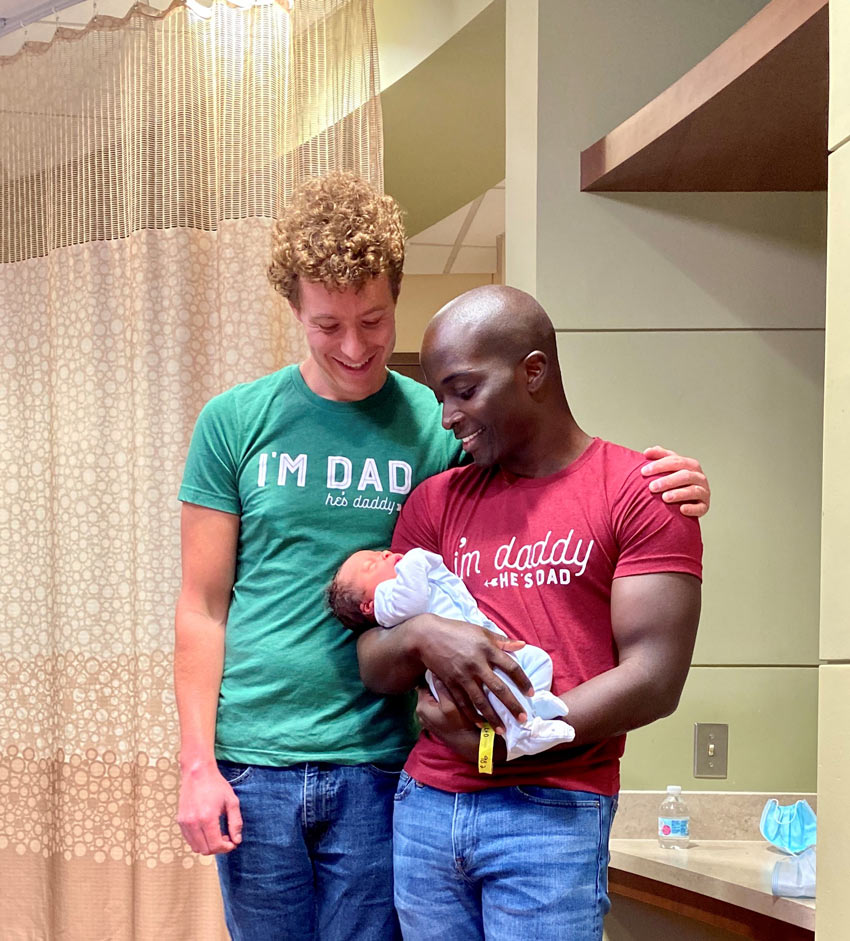 When it comes to words of wisdom for future parents-to-be, Spencer and Daniel said their best advice is to do your research on the team that will ultimately help you usher new life into the world.

“I certainly recommend a surrogate agency for anyone going through surrogacy for the first time,” Daniel said. “Stephanie Scott of {{cta(’91c6fce4-085f-443a-8ab9-958ac55bee11′)}} was amazing and really hands-on. She’s the reason we went with them. We met her at the MBH conference, and she has just had so much impact. She was so genuine.”

They also had an incredible first-time connection with their future surrogate, who ended up being the woman who answered the phone on the couple’s first call to {{cta(‘efa1c5e1-a6b7-4594-85af-80fdce18beb1’)}}.

Spencer and Daniel said on top of having a great support system, it’s also important to make sure your finances are in order, and that you’re both fully on board to be parents. Finally, they said don’t be afraid to ask questions.

“There was also the “what kinda parent will I be” fear,” Daniel said. “But as with all journeys, you must remind yourself that you are on this path for a positive reason, and the destination will be worth the journey.” 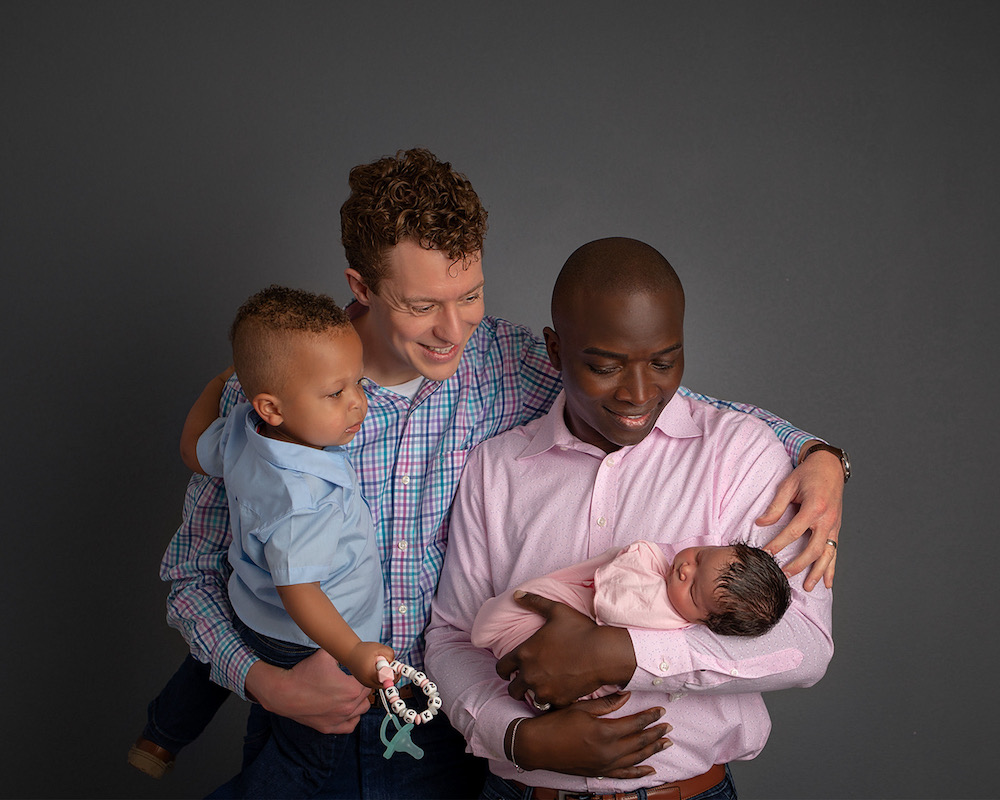 Dads Spencer and Daniel with their two children, Carter and Mackenzie