Texas Dads Say Science, Faith, and Love Awarded Them “The Miracle Of Twins” Husbands Josh Neal and Robert Sleeper were first introduced by a coworker in 2006, while they were working at the same place for their first jobs out of college.

“From the minute we locked eyes, the rest has been history,” Josh smiled.

The couple, who live in Dallas, Texas, said they knew from the beginning that they wanted to have a family of their own.

After they had checked a few items off their bucket lists, including getting married in 2019, they started to focus on their options for having kids.

Robert said they both kept their loved ones educated about the processes they’d be going through as they explored their possible paths for starting a family.

“We’ve always known we wanted to be fathers,” Robert explained. “We considered adoption, however as we became more informed through research and conversations with agencies and doctors, we were blessed to have the support to pivot to surrogacy. Our family and friends supported us every step of the way.”

The pair said they chose surrogacy because it was important for them to have a genetic link to their children, and for their children to have a link to one another. So each dad had embryos created with his DNA, and each is now a biological father to one of their twins.

The surrogacy process was lengthy and tedious at times. The husbands said the start of their journey was initially postponed due to the pandemic in March 2020, which pushed their embryo implantation date back to May.

However, they said their journey was as smooth as it could be thanks to their “village of support,” which helped make their dreams come true. That village included the incredibly supportive staff at their chosen fertility clinic.

“We found our clinic, {{cta(‘efa1c5e1-a6b7-4594-85af-80fdce18beb1’)}} (FST), and met Dr. Skora and his staff, and we knew we were on our way to making it happen,” Robert said. “The clinic and supporting team were phenomenal. Dr. Skora and our case manager, Angela, became much like extended family. When it came time to ‘graduate’ to the OB after three months, we were near tears having to leave them.”

The couple even remain in contact with the FST staff to this day, and said they couldn’t be happier with the service, support, empathy, professionalism, hand-holding and relationships they’re now cherishing through the current portion of their journey.

“We wholeheartedly recommend FST at every opportunity,” Josh said. “We feel lucky and blessed to have found a team and clinic who were in the trenches with us and intimately supported us through the many emotional ups and downs.”

Once the staff at FST informed them there had been a successful implantation of their two embryos, Josh and Robert said they hoped and prayed it would stick. Thankfully, their surrogate had a healthy pregnancy.

“After we were confirmed pregnant with the twins, we then started to nest and prepare,” Josh said.

Nearly two years after they started looking into family-building options, Josh and Robert welcomed their sweet son Bear, and their beautiful daughter Elle, who were born in mid-March 2021. 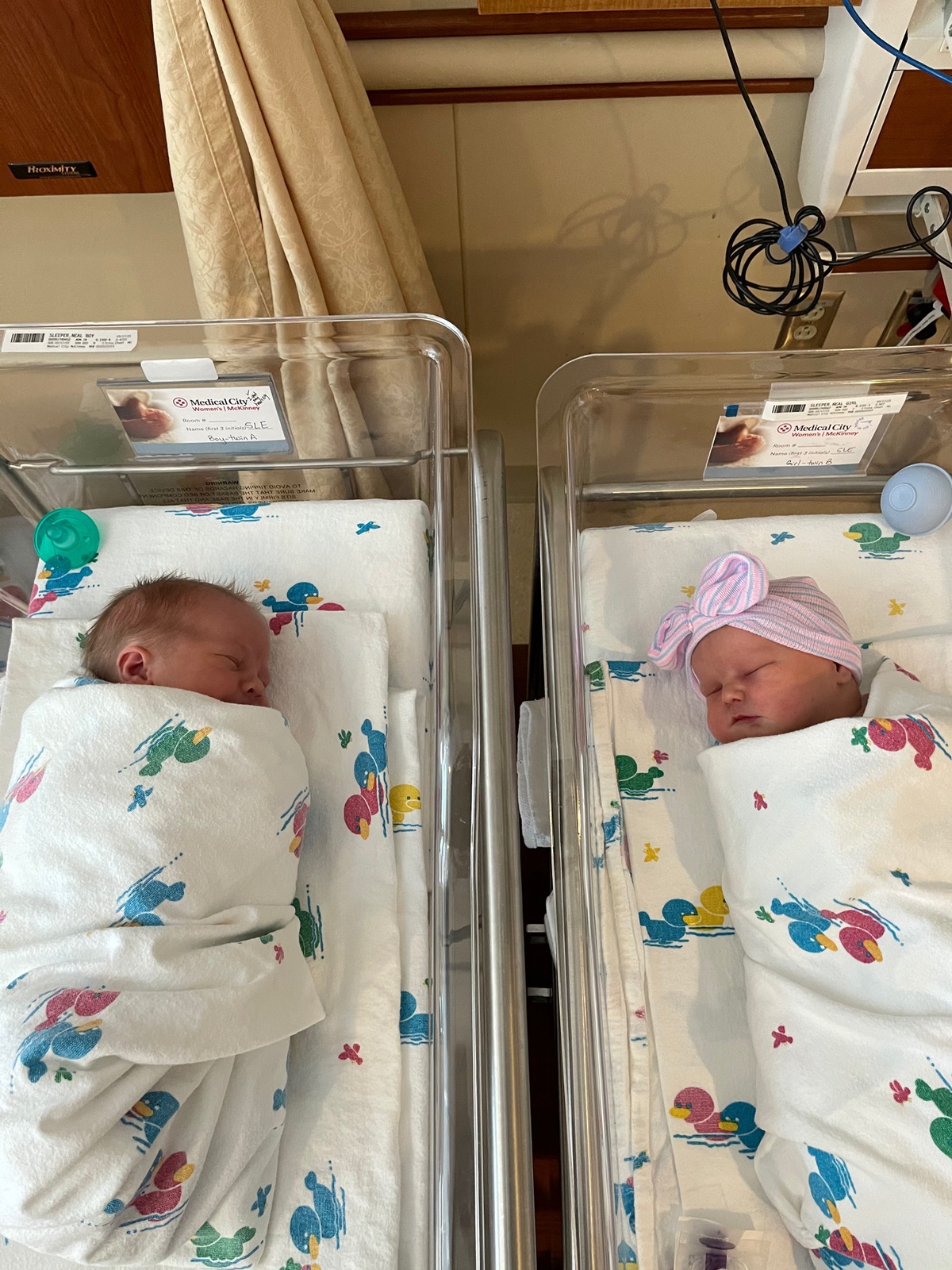 The twins came into the world around one month early, and about one minute apart.

“Our surrogate gave birth to Elle and Bear in the early hours of Saint Patrick’s Day. They arrived happy, healthy and perfectly as our lucky charms! They were born at 7 pounds, 4 ounces each,” Josh said. “Twinning from birth! The power of science awarded us a miracle.”

Bear had some breathing problems at first, and he was kept in the NICU for one day. The new dads said they were really cared for by the staff at Medical City McKinney, who essentially gave them a “baby bootcamp” during their first 48 hours. 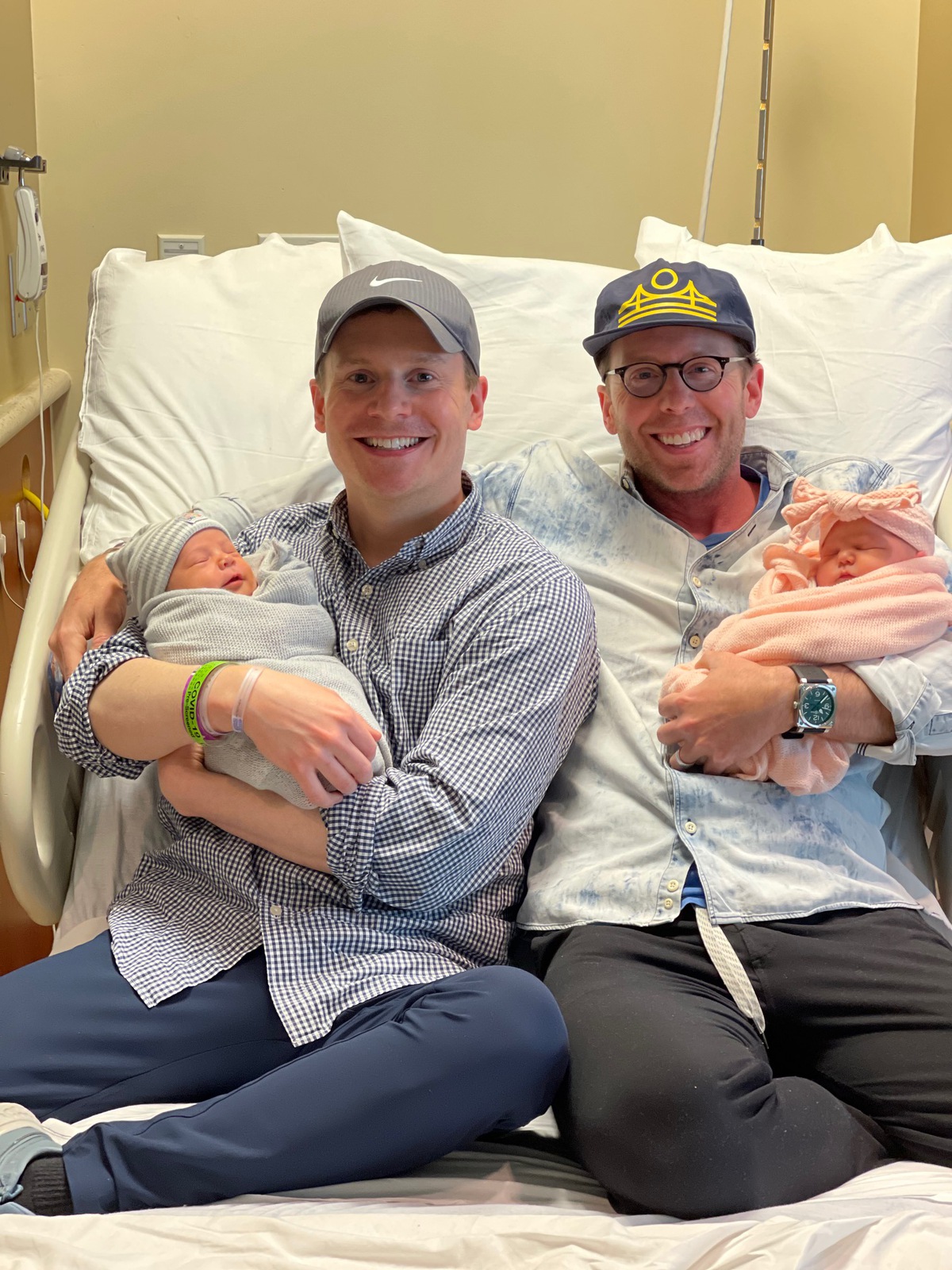 Robert and Josh said they have never experienced doubts about being parents. In fact, they always had great confidence in themselves and their support system at FST. They even took CPR and parenting classes ahead of time.

“We’re honored to be able to set an example of what a modern family can be,” Robert beamed. “Our home and family is a place for positivity and a whole lot of love!”

Their advice to other gay men considering surrogacy is to trust in the process, and remain confident in the science.

“Ensure you build your village of support ahead of time,” Josh said. “Manifest and pray. With the power of positivity and focus, it will happen.”