With the Help of Friends, Mike & Mitch Become Dads For two new Canadian dads, both under 30 years of age, a lot has occurred during the last few years of their lives. From moving to the big city, coming out and being accepted by family, to becoming dads via altruistic surrogacy, it’s been jammed pack, but in the best possible way. We spoke with Mitch, one half of the new father team, and he told us all about it.

Growing up in the prairies of Saskatchewan

When Mitch was younger, he never thought it would be possible to embrace who he was. All he knew about being gay was that it was associated with poor health and bad decisions, and the characters he saw on T.V. only perpetuated these negative stereotypes. He grew up in a Catholic family, and never met or conversed with another gay person during his childhood.

“My source of the gay community was online message boards that I would sneak on to,” explained Mitch. “That was it! I knew of people in my hometown who got beat up for acting gay, whether they were or not; therefore, I did not say ‘boo’ about myself to anybody.”

Mitch suppressed his true self well into his early 20s, believing that his identity as a gay man would never see the light of day. It wasn’t until he moved to Vancouver, B.C., surrounded by a diverse community and acceptance that he began to imagine a different life. 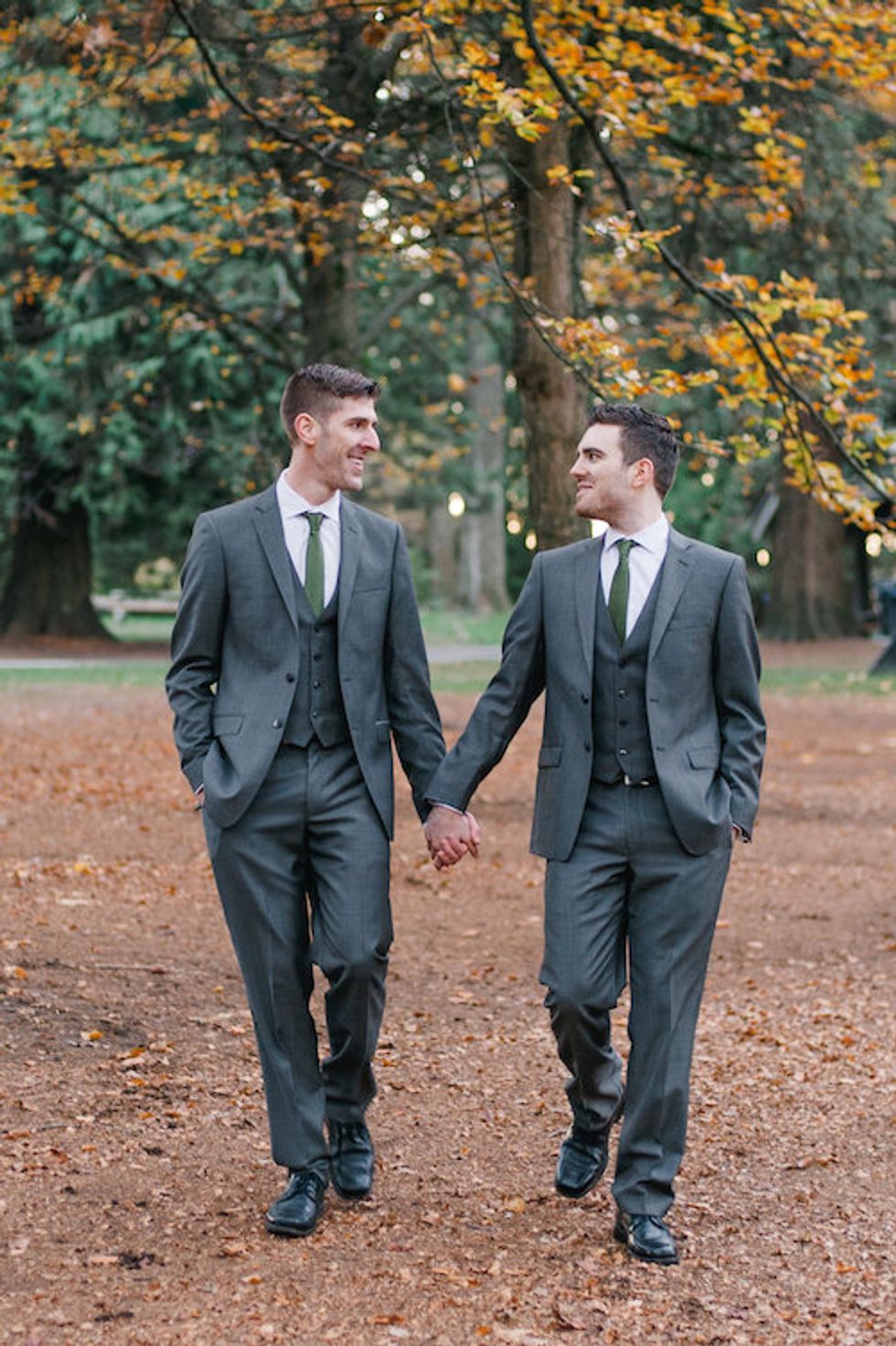 Moving, coming out, getting engaged

While living in Vancouver, Mitch gradually began to accept who he was. Meeting Mike, his future husband, helped speed the process along.

“Because I met Mike online, I found it easy to confide in him,” said Mitch. “It was really him that forced me to come out and say ‘Hey guys, this is who I am!’ And I didn’t really want to hide it from people for [any longer].”

The entire process took a few months. Once Mitch started coming out to people, he felt welcomed. He started introducing Mike as his boyfriend and he couldn’t believe how natural and organic it felt.

“Mike is the first guy I’ve ever dated and it felt so right. We fit together very well. He’s very artistic, I’m very scientific. He’s quieter, I’m a little louder.”

The two got engaged after 2 years; enjoyed being engaged for 2 years, then were married in 2014. 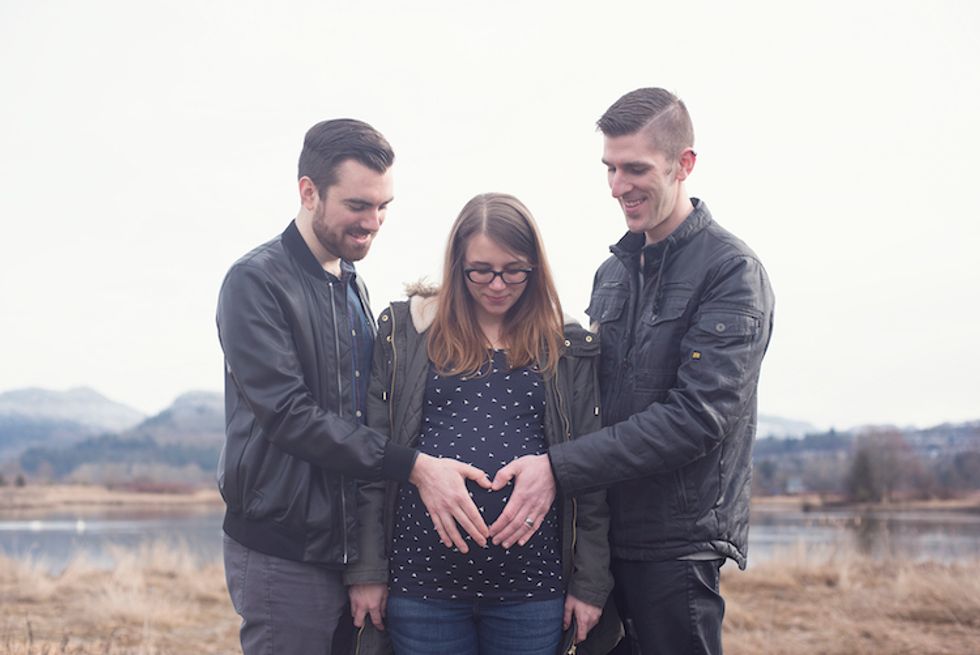 From left to right: Mike, Amanda and Mitch

Mike’s family lived just up the road from the two men and their support of their relationship really helped the couple. Mitch’s family eventually came around, and he’s not angry at them for the time it took.

“Through no fault of their own, they also grew up in an environment where they didn’t know any gay people and where it wasn’t very accepted,” said Mitch. “So it took me dating Mike for a good year before they thought, “Hey, you know what, he can be happy and in a committed relationship despite his sexuality.”

Both families now fully support Mitch and Mike, and neither could be happier with their new in-laws.

“We wanted to get married to show our love for one another and we always wanted to have kids,” said Mitch. “It’s funny how in doing so, it seemed to fit other’s idea of, ‘Oh, I guess you’re just like any other stereotypical heterosexual couple.’ And while that makes it easier for them to understand, it certainly wasn’t our intent. It did however help to break down stigma that is often attached to gay relationships. 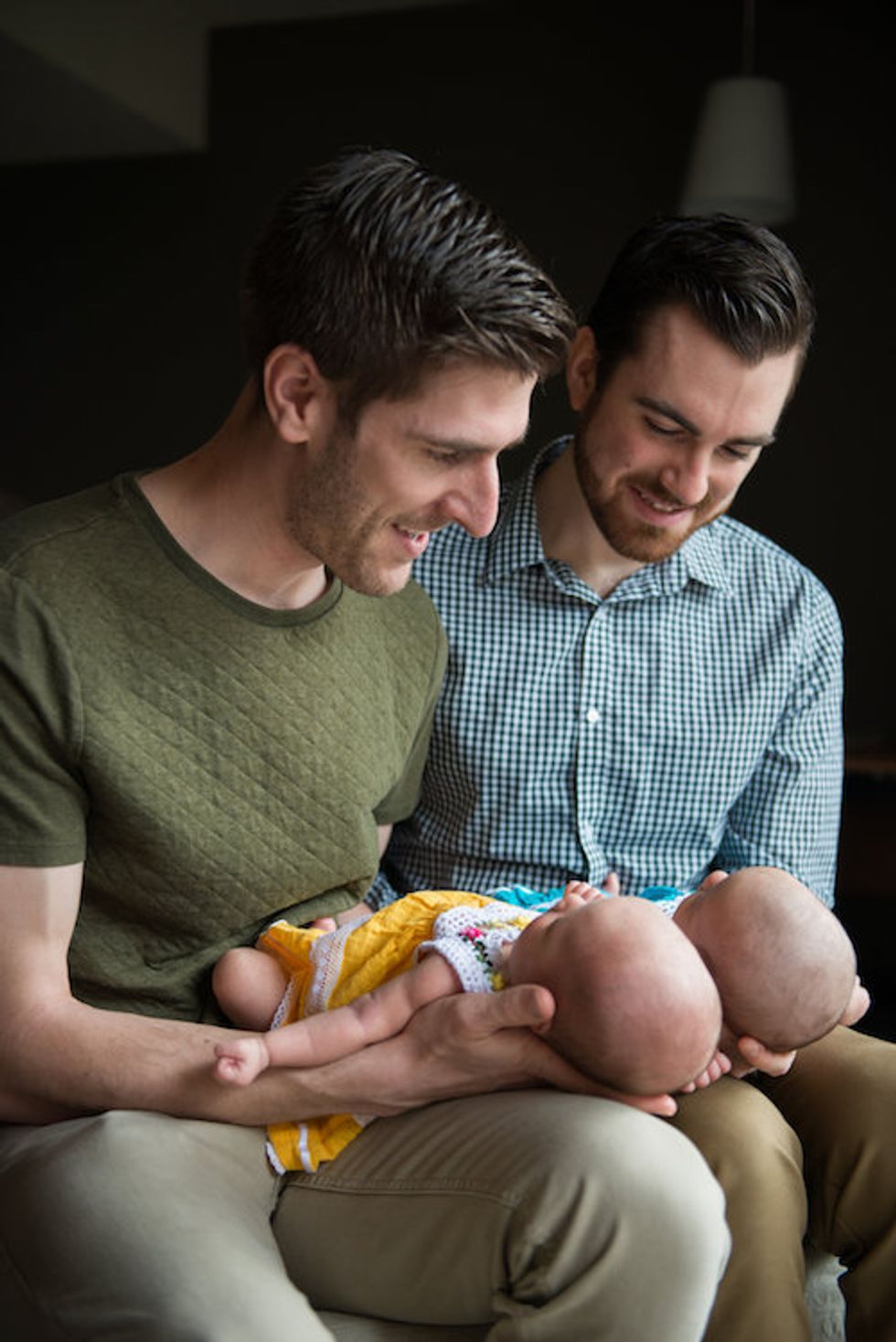 It was another couple’s journey that inspired Mitch and Mike’s own path to fatherhood: that of gay dads Brett and Justin. In 2014, the day that Brett and Justin’s twins were born, Mitch, a respiratory therapist, was on shift. When he saw Brett and Justin’s dream come true, his curiosity got the better of him and he began asking questions. The new dads and Mitch quickly became friends.

Still, it would be awhile longer before fatherhood would become a reality for these young dads-to-be. Even though they now had a path in mind, neither Mitch nor Mike were sure how to proceed. It wasn’t until later that year that a good friend came to them with an idea.

“Our good friend Amanda approached us and offered to be our surrogate,” said Mitch, adding: “On her birthday!” The men were astonished by this hugely selfless offer from their friend, but their luck didn’t end there. Soon after Amanda’s generous offer, another family friend offered her eggs to the couple.

Clearly, the stars were aligned to help Mitch and Mike become dads. But it didn’t happen right away. With so many different people involved, they had to wait till everyone’s schedules could align. So it wasn’t until about 18 months after their initial discussion that they could begin the process. 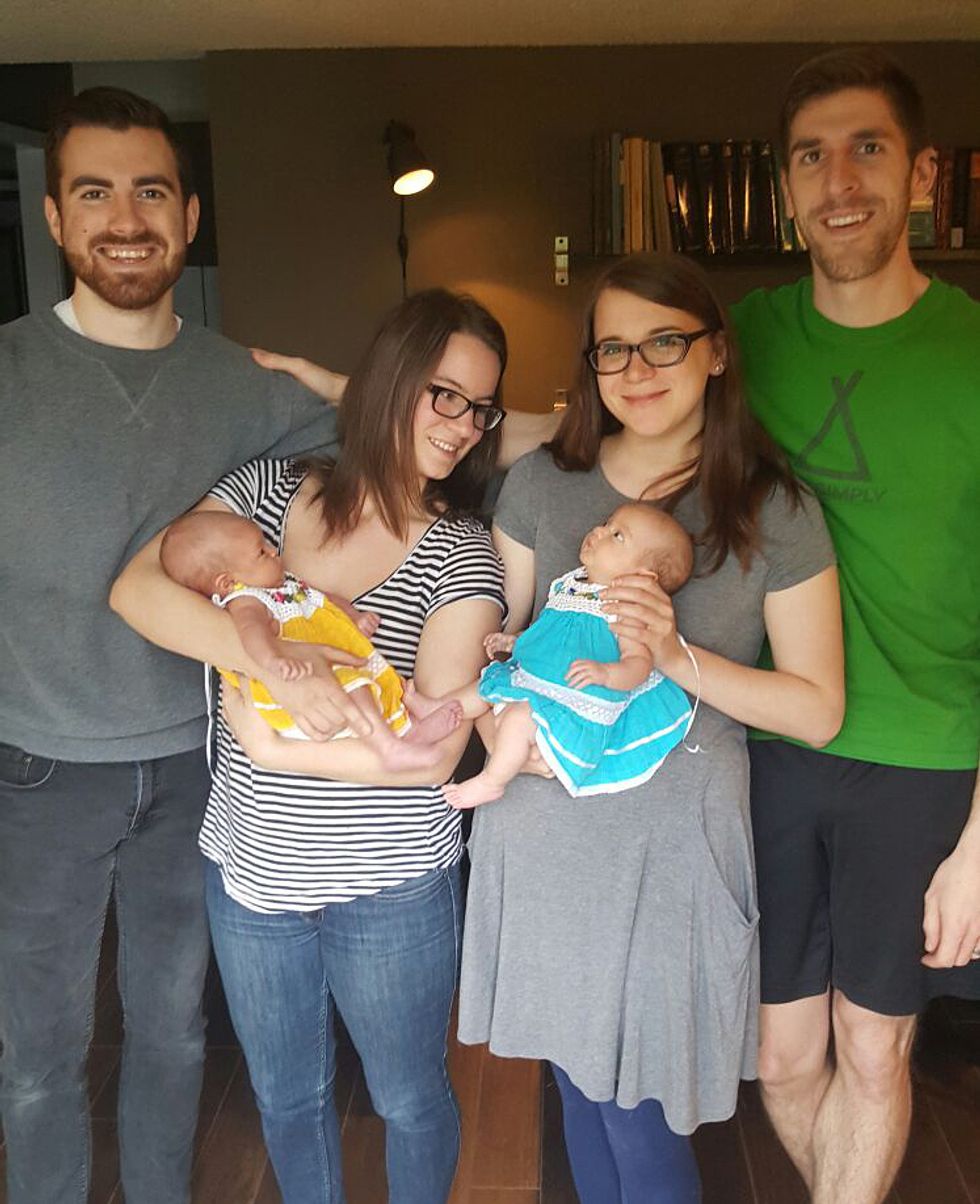 From left to right: Mike, Bella, Amanda and Mitch

Both dads are enjoying as much time as possible with their newborns. Mike is self-employed as a piano teacher, and Mitch is off on parental leave so they’re working around Mike’s schedule, sharing the dad duties so both can rest and sleep in between feedings while the girls nap.

Mike’s parents live just down the road so they’re very engaged in the twins’ lives. Mitch’s dad also frequently makes the 16+ hour drive out to visit the girls and new dads. Sadly Mitch’s mother passed away last year so she never was able to meet her granddaughters after being so excited for their arrival.

Amanda, the surrogate, who will be known as “Auntie Amanda” to the girls, is still very involved in the twins lives. Bella, the egg donor, lives further away so is not as involved but the dads look forward to figuring out her place in the family once the girls are old enough to understand where they came from.

A Gay Dad’s Message to the Airlines: Put Kindness First

The Famous Real Dads of Melbourne